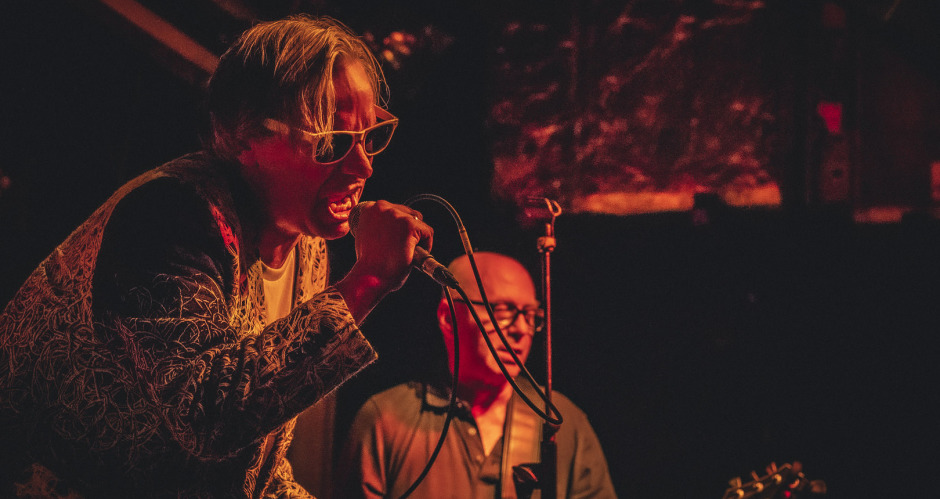 Somebody put something in

where they will play with the extraordinary

Thanks go to our beautiful

audience and the amazing

The Boy Scouts from Waiblingen 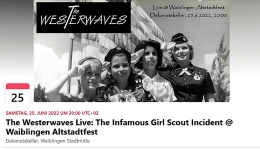 What a great night
Thank you, Waiblingen!
Thank you, girl scouts and boy scouts.
You were a great audience.
And special thanks again to
Torsten Westerpic for Westerpics.

We love you too, ladies!

The great Kat is featuring us in her show,

together with other aliens, stormtroopers

and wookies. Tune in!

Legends among themselves:
Marky Ramone says hello
to Jesus Westerwave
(thanks go to Kris!)
April 3, 2021 Nobody expects the Spanish Inquisition,

A BRAND NEW ALBUM OF THE WESTERWAVES!!

It’s called DINGELINGELING and it contains 12 tunes that will make you melt into a pot of happiness and love of penguins. Songs about deep fried children, Genghis Khan, Barbie, teenage lesbian cowboys, and two classics of the Westerwaves for the first time in studio versions: Morrissey At The Butcher’s and We Make Money Off Your Antifascism!

EPISODE 1: Morrissey At The Butcher‘s
Until now, this classic of the Westerwaves could only be found in their extraordinary live album Moshpit For The Midgets and in some obscure bootleg recordings. The song now finally gets the treatment it deserves, with a lush arrangement courtesy of Paula Lomeli-Schrödinger that makes the tune sound as if Manchester had been taken over by an army of cowboys led by Johnny Cash.
The lyrics confront the listener with an ethical conundrum materialized in the form of Morrissey's appetite for carnic products. Needless to say, the song is not only a metaphor of the inner struggles of the contemporary middle class, but also an alibi to talk about chorizos, pork ribs and the suffering of chicken.
Lyrics:
I am so ashamed of myself
Looking hypnotized at the chorizos on the shelves
I am so ashamed of myself
I despise the moment when black pudding crossed my way
Morrissey at the butcher’s
So long craving for a steak
I cannot stop my feelings, I cannot control the shame
So long craving for a steak
The suffering of chicken does not matter much today
Morrissey at the butcher’s
And I cry myself to sleep
Nibbling at a pork rib
Don’t tell William what I did
It was really nothing, Will

Morrissey at the butcher’s 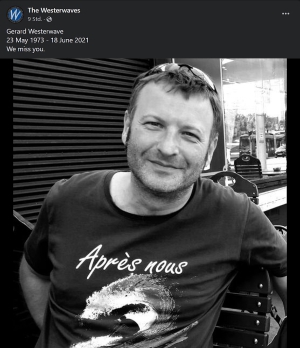 This was FISH & CHIMPS 2022,
a night to remember.
Stay punk. Don’t be an antifishist.
(Very special thanks to our Torsten Westerpic for impressions) 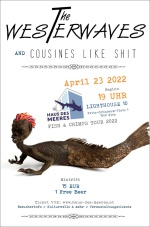 pays his taxes and the whales exhale!

Mysterious lyrics for a song about fiscal policy in Chicago in the 1920s.

Produced and mixed by the great Paula Lomeli. 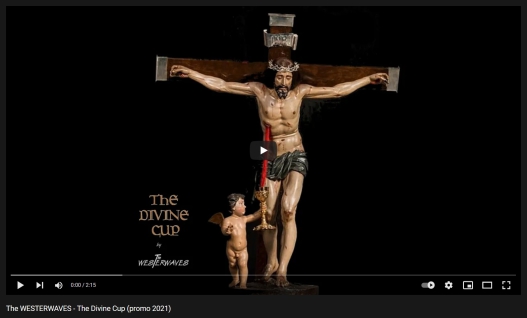 "With The Divine Cup, The Westerwaves have created one of the most important pieces of art

of the 21st century. The album is a conceptual work that acts at the same time as an instrument of

social critique and as a transcendental element

of catharsis, in particular if you tend to like goats more than you should."

"Nobody cares about my Baby" and much more!

"Farewell, Gerard Westerwave.
Toughest fighter on and off the stage.
Forever in our hearts." 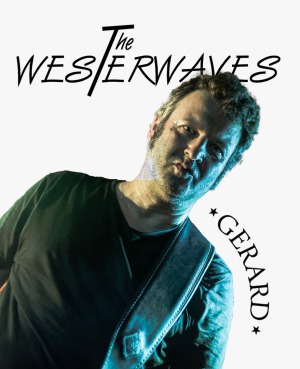 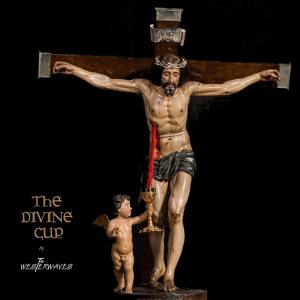 THE DIVINE CUP by The Westerwaves. Liner notes by Slavoj Žižek

With The Divine Cup, The Westerwaves have created one of the most important pieces of art of the 21st century. The album is a conceptual work that acts at the same time as an instrument of social critique and as a transcendental element of catharsis, in particular if you tend to like goats more than you should.

The album starts with Culture Taliban, a complex portrait of modern societal struggles to conquer liberty making use of religious paraphernalia and bestiality, packed in the form of a sing-along punk anthem.

Captain Is Leaving The Boat, the second song in this collection of masterpieces, contributes to modern social theories of hierarchical thinking by stressing injustice and inequalities in post-capitalist Europe while allowing you to pump your fist in the air and scream “Step aside! Step aside!”.

Terror Boyz! is a deep self-critical assessment of child labour in industrialized economies and tells a story of exploitation and slavery of pre-adolescents, used as beer carriers for rock’n’roll bands. This song sets the path for a tune about entering the metaphysical maze of existence, accordingly titled Philosophical Detours. Legend has it that the lyrics of this song are coauthored with the renowned social philosopher Roberto Blanco.

Topless In Teheran stresses the duality of morals in phalocentric social contexts, as beautifully summarized in the anthemic sentence “Khomeini, he liked boobies but respected Ramadan”.

The contradictory nature of the ethical conundrum posed by the postmodernity of societal relations is also reflected in The Seven Sons Of Philip VII, a moral fairytale rooted in British history and where The Westerwaves show their gift for sophisticated yet humorous social critique.

Bat Soup Swinger Party and The New Legends Of Lincoln Park are seminal examples of the Westerwaves addressing the challenges of health threats and postindustrial urban landscapes, and are presented in new mixes that highlight their lyrical beauty for the first time in this album.

Finally, Flower Gardens Of Radiology concentrates on the hidden power of matriarchy within the natural sciences, as exemplified in the figure of its most relevant victim, Pierre Curie.

The album closes with an incredible piece of musical archaeology, the infamous bootleg recording of Nobody Cares About The Baby.
According to some sources, Paula Lomeli-Schrödinger made the band record this song live in a public toilet in order to capture the disappointment and despair felt by Baby Westerwave in the aftermath of the infamous Currywurst incident. The raw live recording does justice to this mythical tale of sacrifice and betrayal.
released March 20, 2021

Produced and mixed by Paula Lomeli-Schroedinger 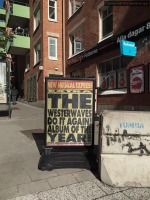 The specialized press reacts to The Divine Cup:

“The Westerwaves’ new album sounds as

if Johnny Ramone, Brian Wilson and an alcoholic imam had adopted a bipolar baby and fed him every day amphetamines for breakfast”

Normal bands bring out a single with artwork referring to the A-side.

The Westerwaves are not a normal band,

so they also have artwork for the B-side.

Because the Westerwaves only have A-sides.

When you least expect it, The Westerwaves kickstart the second wave of pestilence!

The hardest working band in the penguin-punk scene release a mini-EP with three new tunes to short-circuit your neuronal networks.

A song about ordering bat soup while in a swinger party, another song about how neoliberals tend to wear hats and an amazing live recording of a Westerwaves classic, all for you to enjoy in Spotify, Bandcamp, or wherever you shoot your Westerwaves junk! Stay unsafe!

“ It made me want to eat chorizo ” (Morrissey) 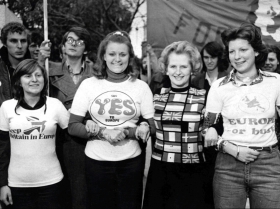 “ If you play it really loud it heals syphilis ”

“ Man, do we ever love this guys. Irreverent, brave, amazing rock & roll. 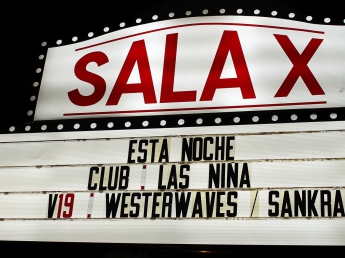 (Anonymous member of the Econometric Society)

“ Amazing sound, great performance, I’ve never heard anything like this before ”

(The Monsanto Journal of Modern Music) 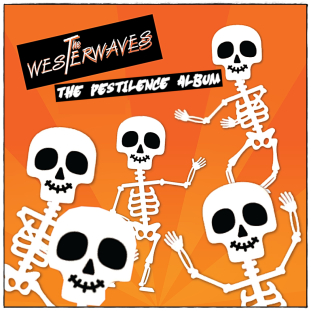 You are probably amazed about The Westerwaves’

incredible productivity in the confinement weeks,

but you did not know what was expecting you today

A BRAND NEW ALBUM BY THE WESTERWAVES!

Apart from the songs about pyramids, tennis lessons and fiscal policy in Chicago that you already know, the album is full of jewels, including the first ever studio recording of the Socio-Ecological Transition Blues and songs about the ageing process of Asian women (Naoko), religious leaders in flames (The Pope Is Burning), the prediction abilities of our drummer (Forekasta), ordering pizza (Washington DC), Lithuanian apples as a challenge to agricultural commodity prices in the Balcans (Serbian Apple Whole O’Cost), figging (Ginger Girls) and modern philosophy (As Schopenhauer Said), as well as a power ballad for the lovers out there (Satanic Boyfriend). On top of that, new mixes of That Was Bowling and Lyrical Arsenal by Paula Lomeli.

Sit down, relax and enjoy the ride!